At the Rolls-Royce Tennis Club you can participate a various leagues and competitions.

The teams play in all divisions, hence there will always be a team matching your tennis skills. For more detail and current standings see Derby Area Tennis League Standings

We also have two teams in the lower tiers of the Burton Tennis League, one Men’s and one Mixed.

We compete with 3 teams in the Team Tennis Derbyshire league.
2 Men’s teams
1 Ladies teams
These Teams play on a Sunday and play singles as well as doubles.
For more detail and the current standings see Aegon League Team Tennis

At the Rolls-Royce Tennis Club we also host and internal doubles competition. Competitive doubles against people of your own standard while keeping track of rankings.

Once a year around August we host the RRTC Club Championships. A knockout style competition (including consolation competition) to determine the best playing members in all categories at the club.

As a member of the Rolls-Royce Tennis Club you can also participate in various other open tournaments around the region. For example the Derbyshire Singles league or Derbyshire Tournaments. 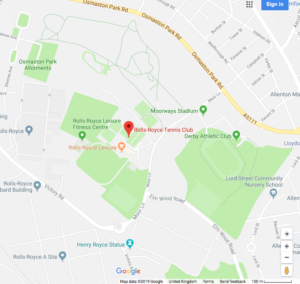